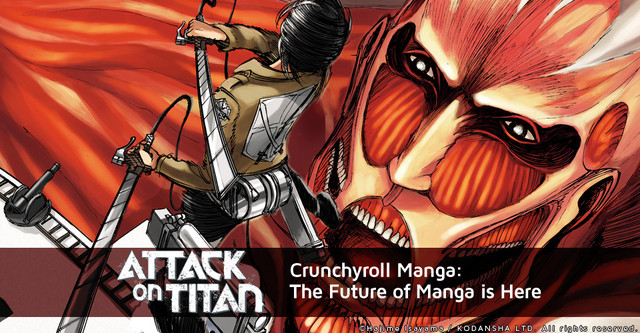 Kodansha Comics, the main manga publishing arm of the Japanese company have teamed up with Crunchyroll to create Crunchyroll Manga, an online "simulpubbed" platform to allow subscribers and free users to read the latest chapters from current manga being published in Japan. Free users would have to use the service with ads while subscribers can read the latest chapters without the ads and can access the archives of the titles to read previous chapters. The service is set to launch on the 30th of October.

There will be twelve titles available on launch with fifty on the service by next summer. Following title list is from Cruncyroll's article.

"Attack on Titan" by Hajime Isayama
A dramatic action-adventure where humans must battle mysterious giants for survival. Currently one of Japan’s most popular manga, it has recently inspired a hit anime streaming on Crunchyroll now.

"Fairy Tail" by Hiro Mashima
A guild of wizards-for-hire use their skills in an age of magic and wonder.This ongoing manga series, created by Hiro Mashima, has also been adapted into a popular anime series. (Current series wrapped up on Crunchyroll)

"Space Brothers" by Chuya Koyama
Award-winning manga about two siblings struggling to fulfill their childhood dreams to become astronauts. Inspired an anime series now streaming on Crunchyroll as well as a live-action movie.

"UQ Holder!" by Ken Akamatsu
From the creator of "Negima!" comes this fantasy set in a future where the existence of magic has transformed the world and a boy named Tota must leave his home village on the path of adventure.

"Mysterious Girlfriend X" by Riichi Ueshiba
A tale of addiction and lovesickness revolving around a strange bond between classmates Urabe and Tsubaki. Also inspired a popular anime series.

"A Town Where You Live" by Kouji Seo
School, relationships, and comedy are combined in this manga about a girl who moves from the city to the countryside.

"Yamada-kun and the Seven Witches" by Miki Yoshikawa
Two students – a boy and a girl – unexpectedly swap bodies and must uncover the secrets of the "Seven Witches" at their school, who each possess a different power. Recently adapted into a TV drama.

"As the Gods Will - The Second Series" by Muneyuki Kaneshiro (story) & Akeji Fujimura (art)
What seems like just another boring day at school becomes a deadly and surreal game, and student Shun Takahata must find out who is behind it.

"My Wife is Wagatsuma-san" by Yuu Kuraishi (story) & Keishi Nishikida (art)
One day, a girlfriend-less student wakes up 10 years in the future to discover he is married to the prettiest girl in school. How did it happen and where is their relationship going?

"Fort of Apocalypse" by Yuu Kuraishi (story) and Kazu Inabe (art)
Accused of a crime he did not commit, a young boy is sentenced to life in prison only to find himself at the center of an outbreak of zombies!

"COPPELION" by Tomonori Inoue
20 years after a nuclear meltdown devastates Tokyo, three girls who were genetically engineered to be immune to radiation are sent into the mysterious disaster area to search for survivors. (Currently streaming in anime form in the US from VIZ and in the UK from Animax UK)

"The Seven Deadly Sins" by Nakaba Suzuki
In this comedic fantasy adventure, a princess goes on a quest to reassemble a disbanded group of knights when her kingdom is taken over by the evil Holy Knights. Source: Crunchyroll
Advanced Search

The Summer You Were There
Lost Lad London Volume 1
Invisible Parade
I Belong To the Baddest Girl at School Volume 1
Heavenly Delusion, Volume 1
My Androgynous Boyfriend Volume 1
The Trial of Kitaro
Emanon: Memories of Emanon Volume 1
The Girl From the Other Side: Siúil, a Rún Volume 1
Giant Spider & Me: A Post-Apocalyptic Tale Volume 1 Volume 1